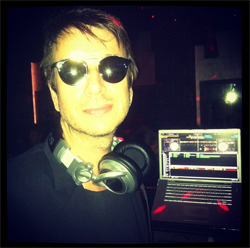 Growing up the shadows of London NICK MARC developed a love of music at an early age. A growing disillusionment in his home country in the early nineties led to NICK MARC finding his way to New York City where he started establishing himself as a DJ spinning at venues such as Coney Island High, Webster Hall, Wax and Spy.

In 1995 he founded the legendary TISWAS party at Coney Island High where it quickly established itself as the premier indie/dance party in NYC before moving to the infamous Don Hill’s for a seven year run and then re-launching at Lower East Side club The Annex. NICK MARC’s innovative DJ sets mixing indie, rock ‘n’ roll, Britpop, sixties garage, soul, electro, punk/post punk and more anchored the festivities with many crediting him with advancing the indie dance party in not just NYC but in the USA as a whole. He was also co-founder of the ON! party at Life and Shattered at Spa.

We hope you are all emerging from the pandemic of the last year in good health and as we reopen we look forward to seeing you as events start up again.

Thanks to all who have tuned in to the TISWAS live stream for the past year, we hope to do the occasional live stream once in a while and maybe sometime soon we will do the TISWAS 25th Anniversary party we had been planning to hold last year!

Wishing you all an amazing summer!

#tbt Just came across this shot of the one and onl

R.I.P. David Crosby. From the Byrds to Crosy, Stil

Back doing the the Moz Nite thing at the Casa toni

R.I.P. Jeff Beck, iconic guitarist of the hugely i

Happy birthday to both the King and the Starman! T

The return of Moz Nite tonight at the Casa! See yo

Happy New Year darlings, wishing you all a fabulou

Remembering the legend that is Joe Strummer on the

Tweets by @TiswasNyc
Scroll Up